Todays post is about the poor mans M3 monitoring, I want to demonstrate that with existing tools you can quickly and easily get emailed notifications if any of your grid applications go offline. You don’t need to install anything for this to work in a current Windows environment.

Maintaining my systems uptimes has been extremely important to me. Downtime has been extremely rare and regularly my servers would typically be sitting in the 1+ year uptime (I primarily used to run Linux/NetWare servers). I often recount the tale of a local ISP who rang me about an internet problem when I had just begun investigating to determine where the fault was. I hold this as the gold standard – notifying the userbase of a problem and that it is being addressed BEFORE the flood of calls. The only way to achieve this is with proactive monitoring.

At IFL I built a fairly comprehensive (but piecemeal as it was done on a $0 budget) monitoring system, graphing utilisation, and alerting me of unusual patterns or quickly alert me when core systems went down – so in the event where something did go down I could quickly jump in, take a look and often fix the issue before my staff knew there was a problem.

I would just like to add some emphasis to the ‘unusual patterns’ comment – establishing a baseline of your system, how it performs normally and its performance patterns when people aren’t complaining is one of the best possible things you can do. Tools like RRDTool can be automated to gather SNMP data and graph it like the image below which represents the traffic to one of my switches – I can see long term baselines – traffic over a year, and I have more granular graphs updated every minute. Often unexplained deviations from your baseline can be indications of impending doom^wproblems.

If you’ve spent some time perusing the InfoCenter documentation which you’ve hopefully installed on your LCM server, then you’ll be aware of the Grid Script Client (Infor ION Grid 11.1.x Product Documentation -> Infor ION Grid Administration Guide -> Managing the Grid -> Managing the Grid Programatically) which allows you to extract some basic status information from a cmd prompt and start and shutdown grids/grid applications (I have a separate post on that coming soon) or you can use nice lightweight REST services.

In the same document I mention above, there is a section entitled “Programmatically Operating on the Grid using REST” which gives you some useful links to retrieve information, or if you set everything up you can shutdown grid node and applications just like the scripting client.

Given some conversations that I have been having over the last 10 months, I thought it would be handy to demonstrate just how quickly and easily you can set up a monitoring system which will alert you to system down event via an email. The goal of doing this was to use only tools which are natively available on Windows, no client software, no copying of a files – just a script.

So, we are going to need Powershell 3 (which is installed by default on Windows 8 and Windows Server 2012 and above) and a script, you’ll also need to allow Powershell to run unsigned scripts. You can install Powershell 3 on previous versions of Windows, but we’re all trying to keep up to date…aren’t we… 🙂

It’s worth pointing out here that I very rarely touch Powershell and I threw this script together over the period of under an hour with a lot of help from google – so the time investment is pretty minimal.

I am going to look at the status call which gives me the state of the various grid applications as per the InfoCenter documentation:

In my case the server is going to be http://ifbenp.indfish.co.nz:16201/grid/status which if we point a browser at it, looks something like this:

With Powershell 3.0 there is a cmd-let which is designed for REST services, so I call

We are storing the data we get in to the $restResults variable. One of the nice things about these queries is we don’t need to be authenticated as we are only looking at data!

The applicationStatus has many attributes, and it is these attributes that we are interested in, specifically the “offline”

here I am looping through each applicationStatus from our $restResults and saving it to $node. Then I am checking the $node.offline attribute to see if it is true. If it is truethen I will save the output to a string.

Then I am going to build an email message which I will relay off one of my internal email servers. I will only email if we actually have something in our output string (where it’s length is greater than 0)

What we can do with this is use the Windows scheduler to fire this script every 5 minutes. Now we have a warning for when any of the grid applications go offline.

If you really go the whole hog, then you could even set up the script so it tries to start the offline application by calling the appropriate REST service, or so it will store the results of the queries for the application and only send reminder notifications every hour – it all comes down to the time and effort vs. the nuisance factor.

If you look at the /grid/nodes interface, then there is information about memory and CPU usage, so equally you could create a script which sent you a notification if CPU was above 80%, or memory utilisation was getting high.

There is a wealth of information available from the Grid which you can query in an automated fashion which with a fairly minimal amount of effort you can achieve some pretty nifty things. 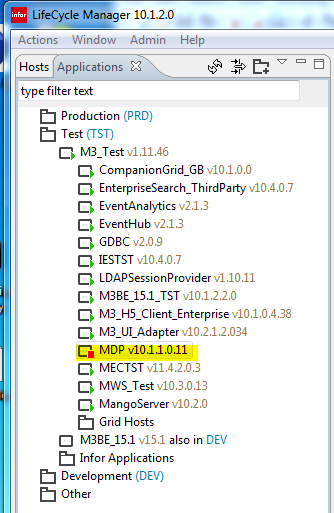 I run my script, and I get the following error message emailed to me.

If multiple services were offline, it would list them. If no services are offline I won’t get an email, if the GRID REST service is unavailable then we should get an exception which my script also captures and will email.

It’s worth point out that this is a proof of concept – so you need to test the scenarios properly and tweak for your environment.

And here it is, the script in its unwashed glory.

22 Responses to The Poormans M3 Monitoring – Powershell and REST