Back in the dim dark past, before IFLs M3 install became gridified I had set up Nagios (an open source monitoring tool) to check the autojobs – this would verify that the autojobs had a status of OK and it would also check that we had the correct number of autojobs. Back in those dark days, we did have the occasional issue where one or some of the autojobs would cease to work.

Once we went to the grid, this was no longer possible due to how the grid structured its data and I couldn’t determine a way to scrape the screen given it was generated through Javascript and ajax calls. But at that point of IFLs M3 journey, autojob issues weren’t as common so rather than spend the time looking for clever ways to do things it just became a part of the morning process to check the autojobs with a webbrowser. As I had a staff member that I could fob this task off to, I was happy 🙂

In an earlier posting I mentioned I have had a number of discussions around monitoring and M3, so the aim of this post is around demonstrating again, that by using the tools built in to Windows 8 / Windows Server 2010 onwards we can quickly and easily create crude but effective monitoring.

This Powershell script will check that the number of running autojobs is what we expect (54 in IFLs case) and if it isn’t, it will list the autojobs as we would see them in the Grid Management pages and send an email alert. The aim is that it would be scheduled to be run by the task scheduler every 5 – 15 minutes.

This script took me around 8 hours to build up and test, mainly because I wanted to demonstrate how we can scrape information from the autojobs that we see in the Grid Management pages which proved to be extremely challenging. 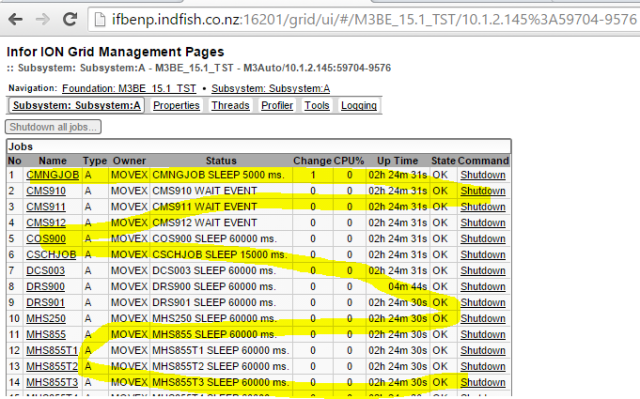 The page above, if you’ve ever taken a look at the source provides a nice ‘javascript not enabled’ error and we can’t see the content. This also occurs when we extract the data from programs that aren’t web-browsers.

I could have used a COM call to Internet Explorer and have it parse the content, but that seemed like it would be cheating and given Microsoft is depreciating IE, rather short sighted. I wanted to use a pure powershell solution that should in theory run on a headless install of Windows.

The first thing I did was pull out Wireshark to see if I could locate the javascript calls being made so I could call them directly – no luck.

Impersonating all of the headers being sent still didn’t allow me to the response I was after, and it turns out that the headers weren’t the important part – we have some arguments in the body that are used by the grid to determine the response.

Figure 3 – the body of the data posted to /grid/ui

With this new piece of information at hand, I discovered I could retrieve the data that is used to display the table.

And then I restarted M3 and my script stopped working.

This is what we see in the grid management pages too

Of-course there is no easy way to discover this information. My thoughts where that I would have to parse one of the other grid pages that provided the link before I could query this page which seemed like an awful lot of work and processing.

So I started looking around and I found some foundation REST services, in particular a rest service for the subsystems

Calling this, I got some interesting data

I got the JVM ID and I also got the type of subsystem (A, I, M), so I now knew that I could get the IDs and work with any of the subsystems.

The eagle eyed will also notice that there is a job count there – so it means that I have an easy way to determine if I have the number of jobs expected without having to go through the intensive process of parsing the UI based tables.

I then went ahead and added code to process the UI based tables as an exercise to demonstrate that we could infact do more detailed and smarter monitoring. For example you could save this data to a file on each poll and check to see if you have jobs that are taking excessive amounts of time – but this is beyond the scope of this posting.

For this script, we will only parse the UI tables if we have a different number of autojobs than expected so the RUNNING jobs can be included in the email.

Which after running my Powershell script yields an email: 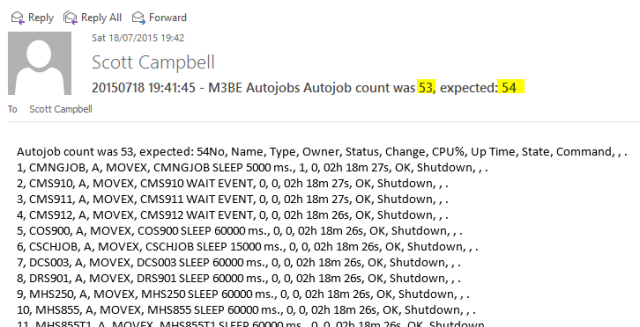 Of-course the body of the email isn’t really helpful, but it is really to illustrate we can extract each cell in a table which will provide us with the option to process the data further – and please excuse the trailing . on each line, Outlook insists upon removing the line breaks if I don’t do this.

And the Powershell script itself

Usual caveats apply – this is proof of concept only. It could be better enhanced so it takes arguments from the command line for the location of the grid so you can use the task scheduler to run a single script with different args…